Patients should be warned that during therapy with clomid, blurring or other visual symptoms may sometimes occur, such as spots or flashes (scintillation scotomata). These visual symptoms increase with an increase in the total dose or duration of therapy. These visual impairments are usually reversible; however, cases of prolonged visual impairment have been reported, with some occurring after discontinuation of clomid (not abuse of clomid). Visual disturbances can be irreversible, especially with an increase in the dosage or duration of therapy. Patients should be warned that these visual symptoms may render activities such as driving a car or operating equipment more dangerous than usual, especially in variable lighting conditions.

These visual symptoms appear to be caused by increased and prolonged therapy. Symptoms often appear or are accentuated when exposed to a brightly lit environment. While the measured visual acuity was generally not affected, the study patient taking 200 mg of clomid daily developed visual blurring on the 7th day of treatment, which led to a serious decrease in visual acuity by the 10th day. No other abnormality was detected, and visual acuity returned to normal on the third day after discontinuation of treatment.

Ophthalmologically detectable scotomata and changes in retinal function (electroretinographic) have also been reported. A patient treated during clinical trials developed phosphenes and scotomates during prolonged administration of clomid, which disappeared on the 32nd day after discontinuation of therapy. 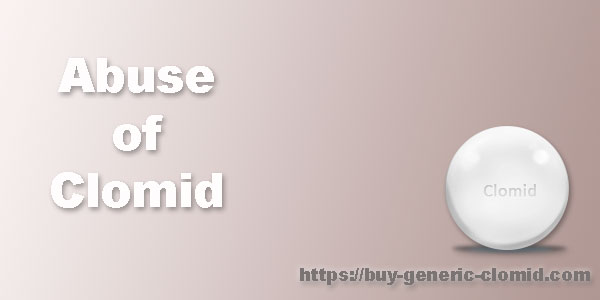 Ovarian hyperstimulation syndrome (OHSS) is reported to occur in patients receiving clomiphene citrate therapy to induce ovulation. OHSS can develop rapidly (within 24 hours to several days) and become a serious medical disorder. In some cases, OHSS occurred after cyclical use of clomiphene citrate therapy or when clomiphene citrate was used in combination with gonadotropins. Anomalies associated with nonspecific liver function have been reported that indicate hepatic dysfunction, which may be accompanied by morphological changes during liver biopsy, reported in connection with OHSS.

In order to minimize the danger associated with accidental abnormal ovarian enlargement associated with clomid therapy (we remind you, do not abuse clomid in any case), the lowest dose corresponding to the expected clinical results should be used. Maximum ovarian enlargement, physiological or abnormal, may not occur until several days after discontinuation of the recommended dose. Some patients with polycystic ovary syndrome who are unusually sensitive to gonadotropin may have an exaggerated response to normal doses when there is no abuse of clomid. Therefore, patients with polycystic ovary syndrome should start with the lowest recommended dose and the shortest duration of treatment for the first course of therapy.

Careful attention should be paid to the selection of candidates for therapy. Pelvic examination is necessary before treatment with clomid and before each subsequent course.