Today we are starting a series of articles about the ovulation stimulation of polycystic ovary syndrome, we are publishing the first part.

Polycystic ovary syndrome (PCOS) is the most common form of endocrinopathy, it occurs in 5-10% of women of reproductive age and accounts for 80%, and according to some data, even 90% of all forms of hyperandrogenism.

The classic picture of PCOS, or sclerocystic ovaries, was described by Stein and Leventhal in 1935 as a syndrome of amenorrhea and enlarged ovaries, combined in 2/3 of cases with hirsutism and in every second case with obesity. However, later it was noted the existence of a wide variety of forms of the syndrome, manifested by a significant variation in the clinical picture of the disease, the endocrine profile and morphological features of the classic syndrome, in connection with which the term “polycystic ovary syndrome”was proposed. In recent years, the concept has been put forward, which has received universal approval, that the clinical manifestations associated with PCOS should be interpreted precisely as a syndrome, and not as a disease, this is a more accurate and specific term.

The etiology and pathogenesis of PCOS are still not fully understood, despite the huge number of studies devoted to this problem.

Ovulation stimulation and the Rotterdam Consensus

The final document of the Rotterdam Consensus (2003) stated that PCOS remains a diagnosis that requires the exclusion of other known disorders that manifest themselves as universal clinical signs of hyperandrogenism, and therefore can mimic and occur “under the mask” of PCOS. While PCOS itself is a syndrome of ovarian dysfunction (irregular menstruation, anovulation, infertility), the specific manifestations of which include not only hyperandrogenism, but also the “polycystic” morphology of the ovaries. Thus, for the first time, an agreement was reached on the need to give an ultrasound assessment of the size and structure of ovarian tissue a significant diagnostic criterion. 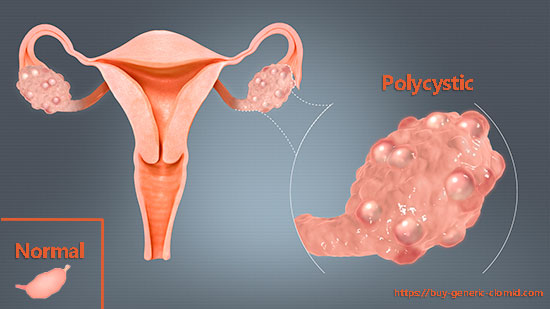 According to the consensus, the presence of at least two of the three criteria makes it possible to verify the diagnosis of PCOS after excluding other conditions. Thus, on the one hand, in terms of examination, PCOS remains a syndrome (a complex of symptoms), the identification of which is impossible and unacceptable on the basis of the isolated presence of any single diagnostic criterion. On the other hand, a simple analysis of the pairwise combination of modern criteria allows us to draw a fundamental conclusion about the need for an expanded interpretation of the term PCOS. This is due to the additional inclusion of new clinical forms in its definition, namely: in the absence of another hyperandrogenic pathology, the diagnosis of PCOS is permissible not only in the classical course (a complete triad of signs), but also in the presence of one of three incomplete (non-classical) clinical and instrumental duets.

It is known that PCOS accounts for 56.2% of all forms of endocrine infertility. Currently, it is believed that the main ways to restore fertility in patients with PCOS should be considered assisted reproductive technologies( ART), the purpose of which is not to treat a woman, but to achieve pregnancy in a specific cycle of ovulation stimulation. The concept of ART includes not only methods of in vitro fertilization (IVF), but also conception in a natural way as a result of various methods of ovulation induction.

The leading link in the structure of assisted reproductive technologies in PCOS is the induction of ovulation. For this purpose, various medications are used individually — derivatives of chlortrianisene – clomiphene citrate (CC) and its analogues, combined oral contraceptives, gonadotropins, gonadotropin-releasing hormone analogues, insulin sensitizers, aromatase inhibitors.

The drug of choice for anovulation is considered to be CC, which was first synthesized in 1956 by WS Merrell for contraceptive purposes. Initially, CC was used for endometrial cancer during the preparation of patients for surgery, but during surgical interventions, yellow bodies in the ovaries and secretory transformation of the endometrium were accidentally discovered, which served as the basis for the use of CC as an ovulation inducer, and since 1967, the use of the drug in patients with anovulatory dysfunction began. Is CC a first-line drug for the treatment of infertility in women with PCOS? This question has arisen throughout the use of this selective estrogen receptor modulator, and there is still no clear answer: whether to use it as monotherapy or in combination with other drugs.