The main goal of clomiphene therapy is to maintain LH at higher values. It should be understood that clomiphene therapy is not curative, it will not “cure” the testicles or pituitary gland, so that later more hormones are released for a long time than before the start of therapy. Clomiphene increases LH only for as long as it works. As soon as clomiphene is canceled, the LH level begins to decrease to the same values that were before the start of therapy. 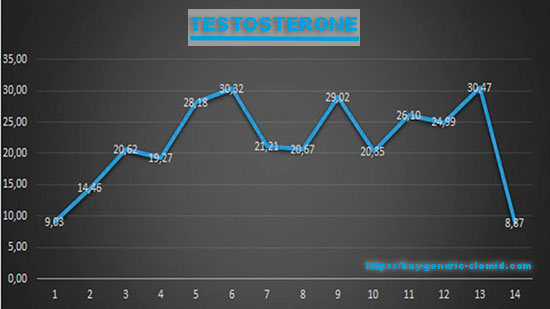 On the graph, you can see how testosterone behaves on maintenance therapy for a year, from 1 to 13 tests, which were once a month. 14 the delivery of tests was 4 months after the cancellation of clomiphene. In this analysis, the level of testsoteron returned to the same values that were before the start of therapy.

From this graph, it can be seen that the testosterone level was good only while taking clomiphene, and there is no effect of testosterone retention after discontinuation of medications in maintenance therapy.